Over recent years fire protection has been a growing market for the consumption of glassflake materials, particularly in coating applications. Passive fire protection products provide localised protection, via thermal insulation, to a wide range of substrates. 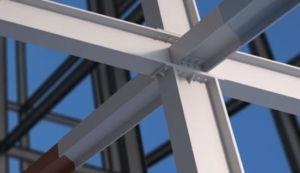 Coating applications can be categorised into flame retardant and intumescent coatings; the former acts a protective layer to inhibit thermal degradation. The latter expands into a thick insulating char upon exposure to heat in order to protect the substrate, namely steel, such that the load bearing capacity of the steel is maintained for as long as possible.

Fillers are essential additives for protective coatings and numerous filler morphologies have been used to improve fire protection performance. Glassflake products are characterised as platelet structures, unlike granular fillers that are uniform in all dimensions, and display very high aspect ratios; the high aspect ratio of glassflake, and its natural tendency to lie parallel to the film surface, forms multiple layers in a coating which provides a drastic improvement in barrier properties of organic resins used in flame retardant and intumescent coatings. The high melting point above 1000oC and parallel arrangement of glassflake provides superior insulation when in contact with fire, which subsequently reduces burning by offering an oxygen barrier to prevent flame spread and smoke emission.

Where intumescent coatings are concerned, it is the morphology of glassflake has been shown to provide superior improvements in the expansion and insulation of the charred layer. The addition of glassflake reinforces the expanded structure so that the coating insulates the substrate for a longer time period, increases the oxidative stability of the char at elevated temperatures and increases the residual weight of the coating to reduce degradation. The platelet structure of glassflake prevents the escape of gases from the degrading intumescent additives, which also contributes to improved performance.

The barrier effect of layered glassflake can also be used to significantly reduce the permeation of both moisture and corrosive ions, increase weather stability and UV resistance, providing additional protection to the substrate in extreme environments. The glassflake composition is engineered to provide enhanced chemical resistance and hydrolytic stability, which means that there is no significant change in thermal stability and fire protection of coatings filled with glassflake when in service in the most demanding environments.

Applications include architectural coatings (liquid and powder), wood coatings (including clear coat formulations) and coatings for electrical cables. Whilst the demand for glassflake in fire protective coatings continues to rise, glassflake can also be used to improve the fire performance of polymer compounds for casing and construction applications, structural adhesives and sealants, insulative panel boards and rigid foam and composite materials.