Chris Long of Yilmaz UK Ltd looks at how changing from a worm gearbox system to a helical bevel system can help lower costs and improve efficiency.

The urgency of climate change is compelling businesses to look for better ways to lower their carbon footprint, increase the efficiency of their systems, and find more sustainable ways to conduct business. Improving efficiencies can also lead to improved productivity and so is necessary for a prosperous and stable future. Since the actual efficiency of any drive train can be no higher than its least energy-efficient part, choosing the right system for the task is an important choice to consider.

Historically, worm gearboxes have been installed in many different types of industry applications because of their compact design and low purchase cost. Despite these initial advantages, this product has a major disadvantage demonstrated in their low efficiency and durability. High friction and an increasing ratio between the worm shaft and worm gear increases energy losses and decreases efficiency compared to other designs. At high ratios, when efficiency is at its lowest, half of the motor power can be lost. When looking at the overall running cost of the machine’s life, the cost of this loss can be very high indeed.

Improvements in technology has produced the helical bevel gearbox, which can claim to have all the advantages of a worm series gearbox such as a compact body and a low purchase cost, but also an improved efficiency.

In worm gears, as the gear ratio increases, so the efficiency decreases through the inherent sliding friction in the design. It is not uncommon for systems to be wasting 30% of the input energy. As friction in the gearset builds up, excess heat speeds up deterioration. What you end up with is a system of fans to reduce the increased heat and a gearbox which will inevitably have to be replaced once the gearset has weakened. To compensate for the wastage, larger motors are installed, and so yet more money is thrown at the system to try and get a satisfactory output.

To reduce friction in helical bevel gears a rolling friction is applied through the design of the gear mesh (see diagram), leading to almost zero rubbing or slipping of the components against one another. In turn, as the efficiency of the helical bevel gear has improved, a smaller motor can now be used, lowering the costs from the outset. Furthermore, a higher nominal torque value is also obtained when compared to the same size and similar ratio worm gearboxes, meaning the service life is much longer.

Improving on the already better design is also possible when the gearsets are polished smooth and the unit is condensed with a monobloc design.

Of the two common finishing methods to gearsets, grinding has proven to produce a better surface finish than lapping. When lapping with an oil lubricant, particles of the material are embedded into the surface, which can lead to an increased friction in operation. When grinding the surface, however, those particles are removed, and striations left in the surface. After running in the machine these markings are removed further and a much smoother finish is achieved. 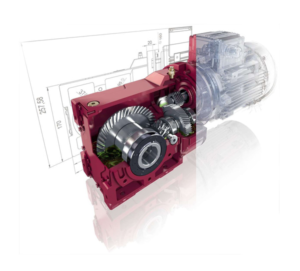 As shown in the performance comparison table, only a 0.75 kW motor is required for the helical bevel gearbox to produce the same output torque as a 1,1 kW motor being used with a worm gearbox. If the application runs 4000 hours annually, there would be an estimated saving of £262 per gearbox. The payback period on a helical bevel gearbox investment is therefore relatively short, especially if the annual working hours are higher than 4000 hours or if several gearboxes are installed.

Yilmaz UK offer a range of 2 and 3 stage helical bevel gearboxes from their K0 Series. The machines are designed to have a high power output per unit volume. Built using a monobloc design, which has several advantages. Firstly, it means all axes can be machined in a single operation so that a high precision is achieved in production. Secondly, an improved mechanical stiffness is achieved, leading to less vibration, lower noise levels, and a more durable machine.

For more information about the applications and savings that can be made, please contact Chris Long from Yilmaz UK Ltd on 01924 284 320 or chrislong@yilmazuk.co.uk 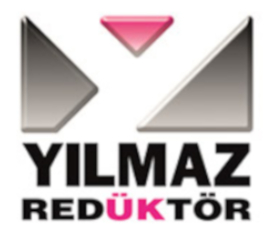