Glassflake products are characterised as platelet structures, unlike granular fillers that are uniform in all dimensions, and display very high aspect ratios; the high aspect ratio of glassflake, and its natural tendency to lie parallel to the film surface, forms multiple layers in a coating which provides a drastic reduction in moisture vapour transmission through organic resins. Where the flakes overlap they create a longer route for permeation to the substrate, referred to as a tortuous path. The barrier effect significantly reduces the permeation of both moisture and corrosive ions, providing protection to the substrate.

For many protective coatings, the requirement to offer substrate protection is driven by the extreme locations for oil & gas extraction. In these harsh environments, glassflake coatings offer anti-corrosion to metal substrates through the formation the barrier and tortuous path to permeation described above. This significantly disrupts the corrosion cell, reducing the passing of ions to and from the metal surface. Handling materials in the petrochemical industry poses very obvious and serious fire hazards, which coatings in these situations must be able to withstand. It is vital that intumescent coatings in these environments can protect steel from rising above 650⁰C to maintain structural integrity – this requirement also now becoming the norm in architectural settings. Glassflake contributes to fire performance by offering an oxygen barrier to prevent flame spread, reinforcing any surface char formed, supressing smoke formation and acting as a thermal insulator.

To offer suitable protection of any substrate, there must be a significant film thickness present. While many specifications will provide an ample film at the time of application, it is important to maintain the film thickness over the full lifespan of the coating – high abrasion rates will in time leave substrate directly exposed to the harsh environments. Glassflake can provide resistance to wear over time, whether this comes from abrasive silt in seawater riser pipes through to heavy vehicle traffic on concrete coatings. This strengthening is provided by the high Mohs hardness and by isotropic mechanical reinforcement via the high surface area of the filler. 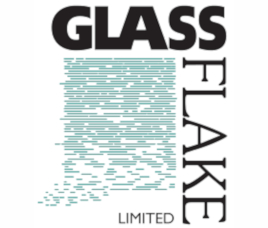